The Nicolai Nucleon 16 is a pioneering bike that will be offered for sale with the Supre Drive.

The Nicolai Nucleon 16 is highly likely to be the first production bike with the Supre Drive. It’s an enduro bike in the 160-180mm travel category with shredding capabilities to be expected from high pivot suspension with excellent kinematics. At the same time, it has drivetrain efficiency that’s better than other high pivot bikes, unsprung mass that’s lower than on other derailleur bikes, and the bombproof reliability of a derailleur tucked up, far from the ground. To top it off, the Nucleon 16 looks as good as it is well-engineered.

The frame is aluminum and made in Germany by Nicolai. The derailleur, chain tensioner, and idler pulley are made in Canada by us, Lal Bikes. There have been earlier models of the Nucleon which had a gearbox and high pivot suspension. These bikes lacked derailleur problems, but like all gearbox mountain bikes, the drivetrain was heavy and inefficient. The Nucleon 16 is a modern, Supre version of the Nucleon that shares the gearbox characteristic of toughness while having the advantages of derailleur drivetrains, such as low weight and high efficiency. This bike is proof like none other that Kalle Nicolai, who started Nicolai 27 years ago, is as visionary today as he was years ago.

Back in November 2021 when I revealed the Supre Drive, I said that I was already working with a bike company. I’m still working with them, but amazingly, Nicolai is not that bike company. I started working with Nicolai shortly after the reveal, and they pulled off this build incredibly fast when considering all that it takes to design and build a frame. The realization of this prototype frame speaks volumes to Nicolai’s in-house fabrication capabilities, their engineering skill, and their bold, innovative spirit.

If you haven’t visited the Nicolai factory in Germany yet, I highly recommend it. It is so cool to see all the CNC machining, welding, designing, and other things done by a great group of people under one roof. Only a few weeks ago, I was on a call with Jens Miller, who did a lot of the design work for this frame, and in the middle of the call, someone interrupted to hand him a CNC-machined linkage part. He told me then that this part is fresh off the CNC machine and is for the prototype frame that you are seeing here. When manufacturing is close to engineering, there’s a tight feedback loop. Ideas come from all directions and they are tested quickly. This is like jet fuel for innovating better bikes.

We are very excited to be showing you this bike. The Nicolai Nucleon 16 frame will undergo some refinements, as will the Supre Drive, and then they will be made available for purchase together. This is a big step toward a future where there will be many Supre bikes from many bike companies for you to choose from.

Pricing and availability info for the Nicolai Nucleon 16 can be found at this page on Nicolai’s website.

Along with the info provided below here, more can be found at this page on Nicolai’s website.

These photos show the first prototype Nicolai Nucleon 16. It has a 230mm long shock with either a 60 or 65mm stroke for 165 or 178mm of rear wheel travel. Depending on the choice of shock, forks from 160 to 180mm travel can be used at the front. The Nucleon 16 has 29in wheels and the ability to be converted to mullet. The dropouts are bolted to the swingarm to enable geometry changes such as different rear-centers for different sizes. The Nucleon 16 will be sold with high end components such as the EXT suspension shown on this prototype. It’s understood that those who want to experience a big leap in drivetrain technology also want the best from the other parts on their bike.

Nicolai lead the charge over the past years toward frame geometry with slacker head tube angles, longer reach, and steeper seat tube angles. The Nucleon 16 has a 64 degree head angle, 490mm reach in size M, and a 78.3 degree seat tube angle. Also, the Nucleon 16 is available in five frame sizes from S to XXL for riders between 1.64m and 2.10m tall.

The frame is designed and manufactured in Germany by Nicolai. Like other Nicolai frames, the Nucleon 16 is made of 7020 aluminum, which is stronger than the 6061 alloy that is commonly used in frames (30% higher tensile strength). The widespread use of 6061 aluminum is due to lower tooling costs and easier frame alignment after welding; however, 7020 is a higher performance material. Also, Nicolai captures the recyclability advantage of aluminum by recycling all the aluminum offcuts from machining and frame fabrication.

For rapid development of this new frame design, several parts on this prototype frame were 3D printed out of aluminum. The properties of these parts are sufficient for prototypes but not production frames, so other fabrication techniques such as Nicolai’s in-house CNC machining will be used for production frames. 3D printing aluminum is a high tech thing, and it’s pretty cool that Nicolai has used it for building this prototype.

The Nicolai Nucleon 16 is an exceptionally good-looking bike. The central, low shock placement and the tucked up derailleur and chain path are contributors to these good looks. Additional contributors are several frame design features that are a divergance from the past for Nicolai. For example, the top tube and down tube of Nicolai frames have traditionally been simple, round tubes, and with the Nucleon 16, they are custom-extruded angular tubes. The Nucleon 16 achieves both beauty and high functionality.

The Nucleon 16’s suspension system is single pivot with the shock driven by a linkage. A pull link connects the swing arm to the rocker link (which this rocker link being connected to the shock). The upper blue-anodized shock mount is fixed. Single pivot suspension systems sometimes have too much anti-rise, where the suspension wants to squat too much from braking. However, high anti-rise is not an inherent trait of single pivot suspension. By having the main pivot far forward, the anti-rise of the Nucleon 16 is reduced to more optimal levels. Braking still causes some squatting forces (anti-rise forces) to maintain the bike’s geometry in steep terrain but without too much squatting forces causing loss of traction. The Nucleon 16 overcomes the anti-rise challenge of other high, single pivot designs. 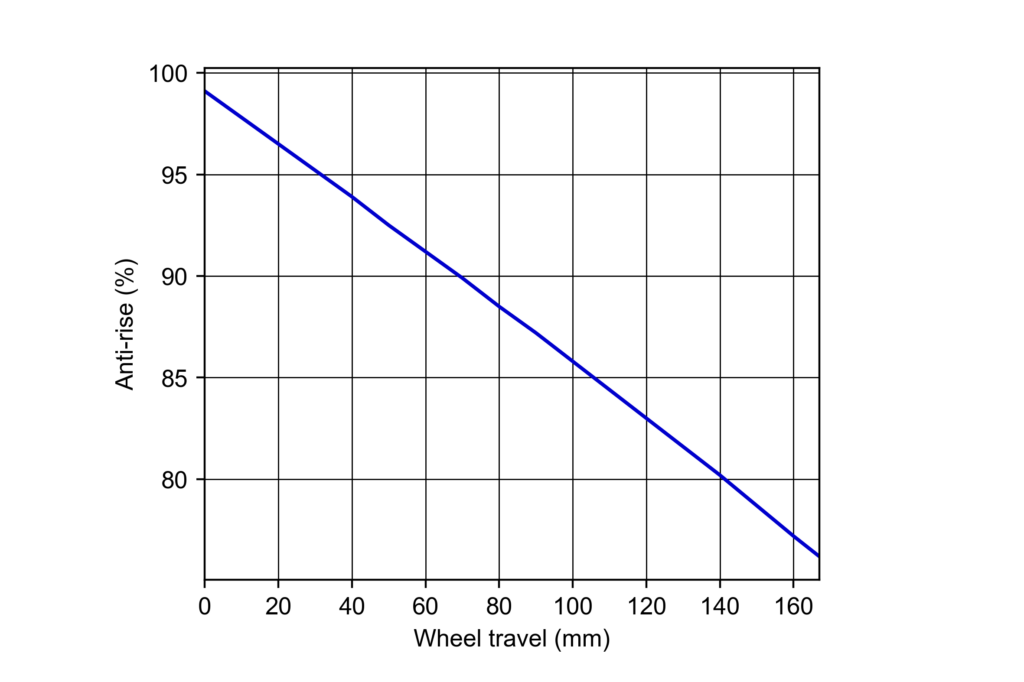 The Nucleon’s anti-squat is high and it increases toward the high gears. This may seem counter-intuitive since we pedal so much in our low gears, but it makes sense because when in low gears, riders often sit while pedalling, and when in high gears, riders often stand up while pedaling. There are additional bob-inducing forces while standing up and pedalling. For neutralizing these forces, more anti-squat is needed. Increasing anti-squat toward high gears is a characteristic that’s shared by other bikes like those from Ibis, Santa Cruz, and Yeti that are known to pedal very well. Overall, the Nucleon 16 has great pedalling characteristics. (The following anti-squat graph assumes a center of mass height of 1100mm from the ground; it’s important for this detail to be specified when anti-squat numbers are provided, otherwise these numbers can easily be skewed in one direction or the other). 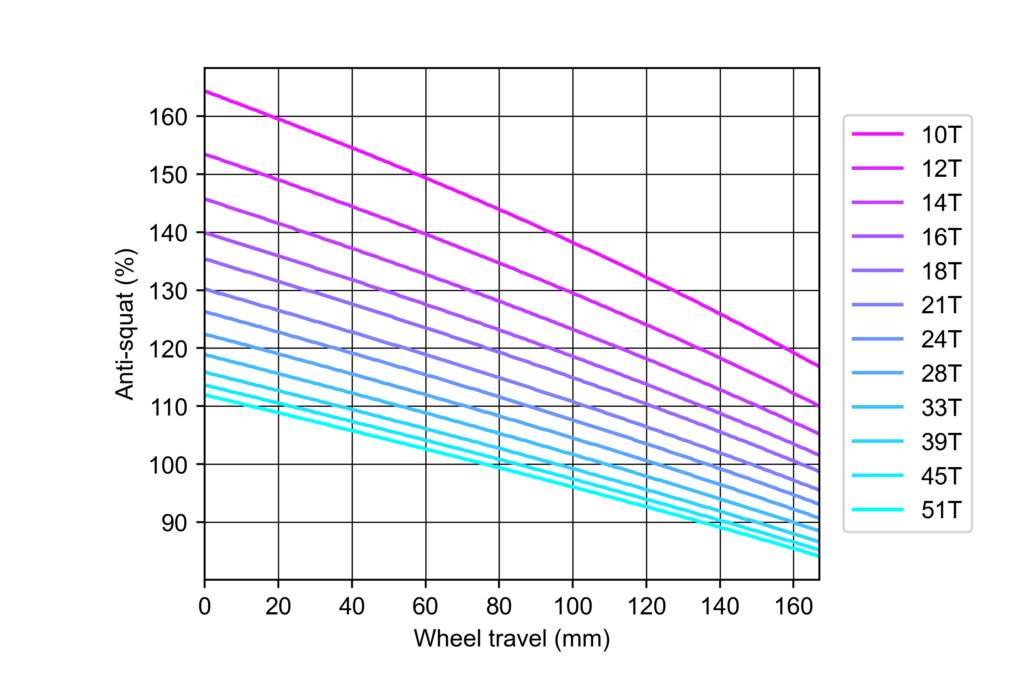 The leverage ratio is progressive. This is optimized for coil shocks or large volume air shocks. 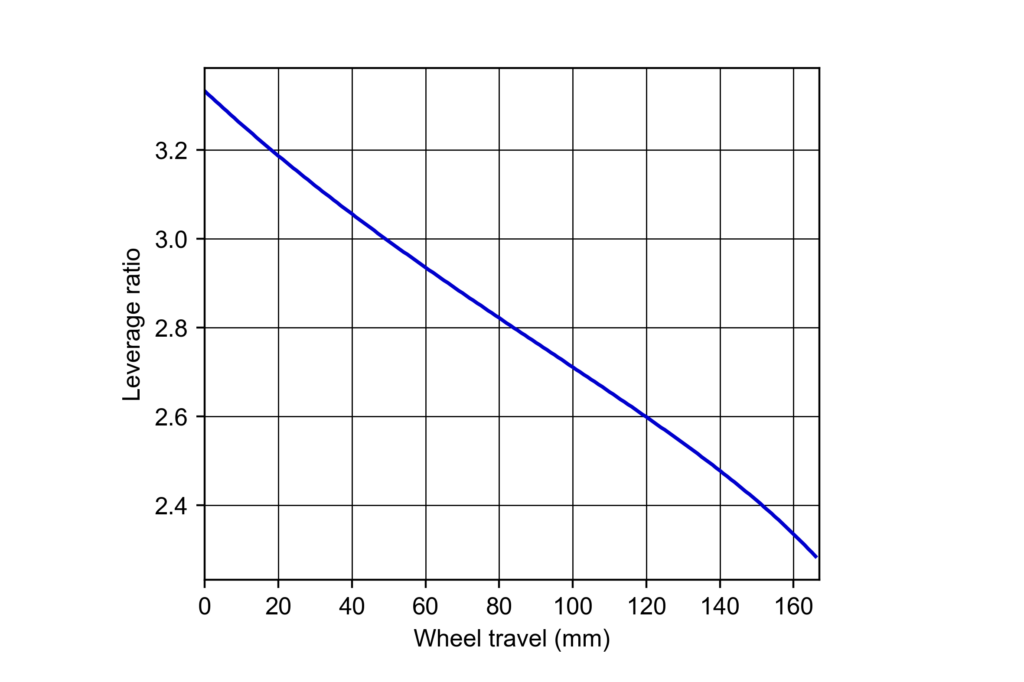 The Nucleon 16 has high pivot suspension, with the rear wheel pivoting around the pivot point just in front of the idler pulley. The rearward axle path creates control in the rough. At the same time, the idler pulley has the almost magical effect of reducing pedal kickback, a trait that’s important especially while pedaling over bumps. There are good reasons for the prevalence of high pivot suspension these days.

The performance advantages of high pivot suspension usually comes at the cost of added drivetrain friction, mainly from the chain passing over an idler pulley. However, drivetrain efficiency is higher for the Supre Drive than for other high pivot drivetrains. Not only can this efficiency advantage be deduced theoretically from traits such as the large pulleys, but it has also been measured. You can find in-depth information about our efficiency measurements in this page of our technical journal. With the Supre Drive, one can enjoy the advantages of high pivot suspension with less of the drawbacks.

The derailleur, chain tensioner, and idler pulley are made in BC, Canada by us at Lal Bikes. We’re proud of this. Local manufacturing not only has advantages for local economies and for supply chain reliability but also for creating a tight feedback loop between design and manufacturing for faster, better innovation.

The latest version of the Supre Drive works with 12-speed Shimano cassettes, chains, and shifters.

The rear hub is Super Boost (157mm wide) and the crank is Boost (52mm chainline). This combination has been pioneered by We Are One with their Arrival bike. It aligns the chain closer to the big cassette sprockets to avoid prematurely wearing them down, and the wider spoke bracing angle at the hub increases rear wheel stiffness for support in the turns. Super Boost rear hubs with a 52mm chainline a significant improvement over Boost all around.

If you have any questions, feel free to contact me (Cedric) through social media, by email, or by phone (see our contact page).